DC comics rebooted their continuity in 1986 with Crisis on Infinite Earths. Wonder Woman was killed in the mini-series and her book was not restarted until 1987. Join Dylan and John as they review and react to the first story arc from the reboot of Wonder Woman. Issues 1-7 give Wonder Woman's origin as well as follow her as she tries to save the world from Ares' evil plan. 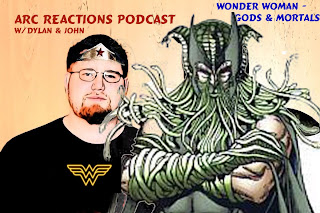 Join us on September 22nd for a supplemental covering some major comics news that has come out recently from Marvel and DC.

Posted by Arc Reactions Podcast at 10:00 AM