John here. As a teenager I was in love with anything Star Wars. I waited in line to get Episode I tickets in 1999 like so many others. When I heard that Dark Horse was publishing The Star Wars comic series that brings a rough draft of the original story to the page, I was waiting patiently for the story to be released. Now that the final issue is out, Dylan and I tackle this story and see what was different in this original version and what was the same. Join us as we discuss this peek into the past of a classic sci-fi franchise. 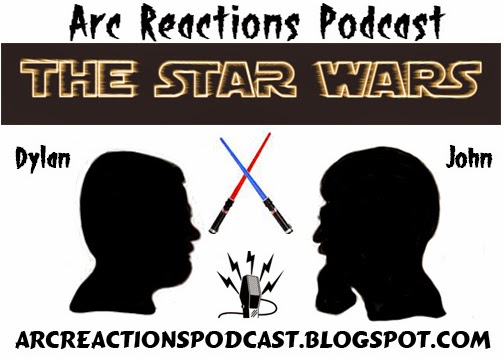 Before we go further, I'd like to point out a couple corrections i noticed when editing:

1) I forgot to mention IG-88 when talking about the bounty hunters. He was not in this story, but was on the bridge of the Executor with the other bounty hunters in Empire Strikes Back
2) I said the vote of no confidence for Chancellor Valorum was in Episode II. I looked it up and it was in Episode I.

I apologize for the mistakes. I was relying on my memory, which I guess isn't as good as I thought it was.

Teaching wookiees to be combat pilots in a short timeframe (22:43)


Our next podcast will be on June 16th or 17th and I will be covering my time at Denver Comic Con with a friend of mine, Paul Trebilcox-Ruiz.


We are also on Comics Podcast Network. Please go over there and check out our section as well as some of the other podcasts they host.


We have new music for our intro and credits. We would like to thank Packie Wambaugh for recording it for us.

Posted by Arc Reactions Podcast at 8:00 AM